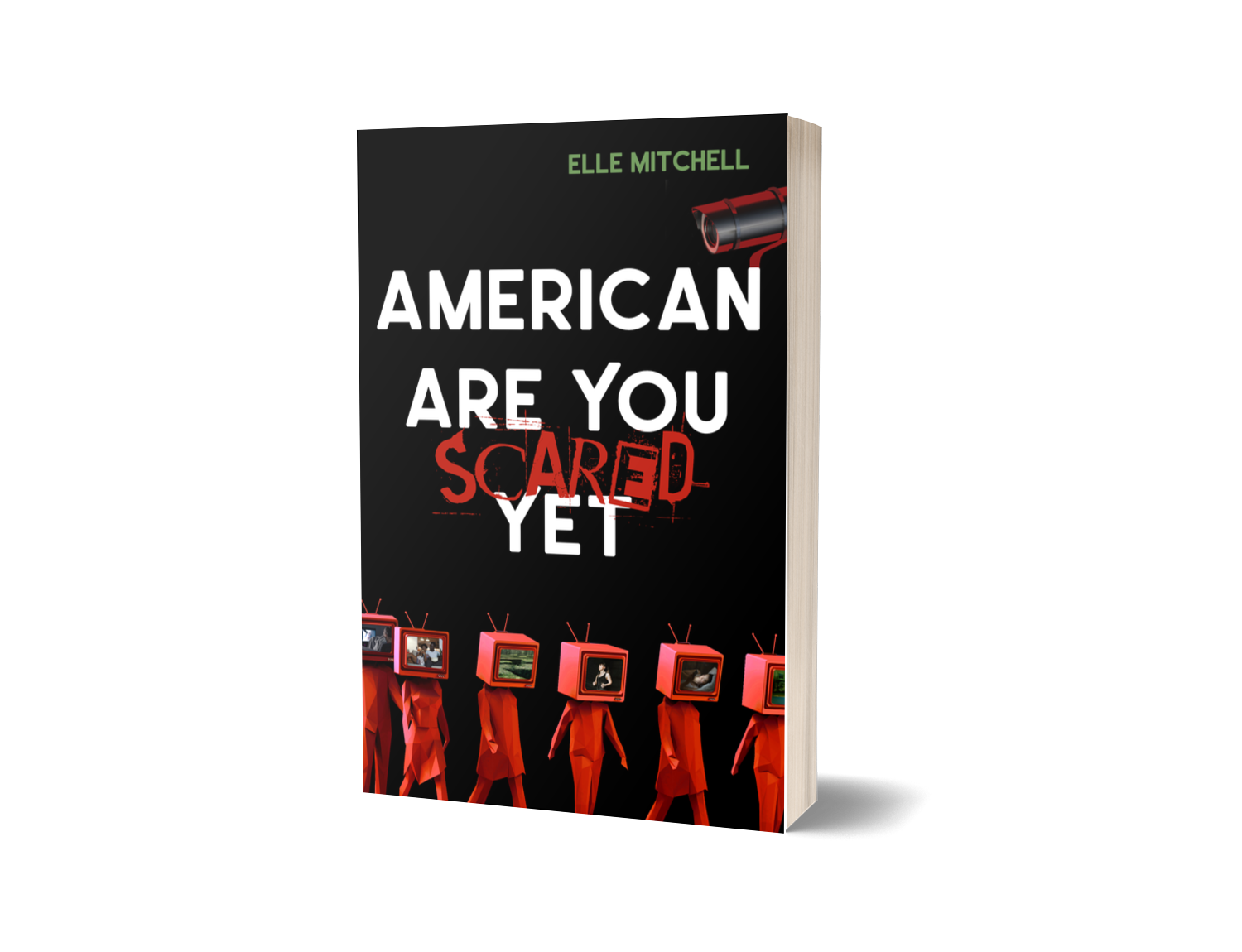 American Are You Scared Yet Signed Paperback

A paperback copy of American Are You Scared Yet, a satirical horror fiction novel, in your preferred format.

A twisted and satirical psychological novel about a live horror survival reality show experienced through the eyes of the contestants and viewers.

3 in stock (can be backordered)

Seven contestants compete for $50 million dollars and the title of American Killer. To win, they have to survive five stages filled with grisly traps, killers, and weeks of living outdoors while under 24-7 surveillance. They will sell you their sob stories, they will suffer, and they will die. Test your nerve as they test theirs. Try not to turn away as they rush headfirst into the darkness.

People around the U.S. are tuning in, some thrilled by the promise of bloodshed, others conflicted at how dark America has become. Watch alongside them as the first season of American Are You Scared Yet unfolds.

Who will you root for? How will you choose your favorite? Experience Elle Mitchell’s experimental horror show American Are You Scared Yet live, Tuesdays at 10/9C, exclusively on Shiver—your place to stream fear.

SQUID GAME meets THE HUNT in this twisted and satirical psychological horror novel.

A quick note from the author:

This book is first and foremost fiction.

All of the names of televisions shows, social media apps, and people referenced have been changed due to the satirical nature of the book’s content.

All of the images used are from free image websites and do not reflect the models’ or photographers’ feelings or beliefs. I have never met nor spoken to any of them; I’m simply using stock photos to show a variety of people, places, and things because we are accustomed to seeing such on the internet.

The social media posts within the book are fake and have been created to serve the purpose of the story. If any of the handles are real, that is purely coincidental and unrelated to the fictional content within the novel; I could not make as many handles as were needed without the possibility of overlap, so I explicitly chose not to consult any social media sites to see if they were used. All photographers are credited on my website.

Okay, I’d strap in now. This is going to be a journey.

Welcome to the American Are You Scared Yet Official Website!

We are the only live reality show, exclusively on Shiver—your place to stream fear! Our first episode will air on Tuesday, February 22 at 10/9c.

Sight unseen, will you root for:

A) The famous surfer

B) The reality star mother-to-be

The ring light is on, the camera is rolling, and the viewer count is at 1,245 and growing. Perfect.

“Hey, fans out there! Thanks so much for taking a minute to check out my Live! I have some incredible news this afternoon! You may have heard some buzz around a show called American Are You Scared Yet. After eight seasons in Japan, it’s totally coming to America. I know what you’re thinking: Will it be as extreme? Will it be any good? The first season of anything is a toss-up—I get it. But I promise you, you’ll want to check this out! Why, Trev? Why?

Cause, babes, I was asked to participate! I’m SO stoked! They saw my surfing vids and thought I could take on the competition no problem. I almost said no. I mean, a lot of people have died trying to win the title of Killer and get that prize money. But then I thought, Trev, you got this. I’ve taken on 71.4-foot waves; I’m practically a water strider. So you know what, babes? I totally do got this. I’m starting up a campaign with shirts and buttons in my support; there’s also a section for a donation to my surf shop. Swipe up or go to my bio for the link to see all the swag I’ve got available! You know you want to back the first American Killer.”

Comments and hearts stream across the screen, and it’s the dopamine hit Trev needs. He doesn’t bother responding. That just makes them thirstier, hoping that next time he’ll answer them.

“Well, the waves are calling, so I’m out!” He clicks off, making sure he saves the video and uploads it to his page. Trev can’t imagine how he’d feel— what he’d do if it went away after 24 hours.

The view count before he closes the app is 54,980. That’s what I’m talking about. If I have to do this, I might as well get some extra fame for it.

He turns off the ring light, kicks up his feet, and goes back to what he was doing before the scheduled Live—playing Mario Cart and eating Fruit Loops.

Clark wants to be the one that posts it, but Vanessa insists that she has more people regularly engaging on her social media profiles than he does.

“Honey, I just want everything to be perfect!” she says. “You understand. I’m doing this for us, really. I want us to have the most fans, the most support, the most love.”

“Sure you are honey,” he replies, kissing her on the forehead.

The photo Vanessa uses is from when they summited Mount St. Helen while visiting and exploring the Pacific Northwest.

She starts her post with “HI, EVERYONE!” From there, it just gets more annoying.

“Clark and I have something so exciting to announce,” it says. “I KNOW, I KNOW!”

Clark watched her excitedly type the whole message, and remembers her eyes light up at the beginning—this must be why.

“We’re just full of announcements lately! But this one is different. We are going to be on a game show!”

Vanessa is watching Clark read the post now. Clark is glad Vanessa isn’t a writer; he couldn’t imagine reading more than a few paragraphs with her eyes on him like this.

“Drumroll please,” the post continues. “It’s American Are You Scared Yet! I KNOW! We can’t believe it ourselves. We didn’t even know the show took couples!” Clark imagines what backlash that comment will bring, shudders, and continues reading. “What a whirlwind of a year we’ve had! Got married! Got pregnant! And now we’re going to be on TV! Wish us luck and send us all your love and prayers just like you did for our wedding and the new addition to our family!”

Vanessa cracks her back.

“Thank you so much in advance for your support!” Vanessa wrote in the final paragraph. “The show airs in one month exclusively on Shiver! It will be on Tuesdays at 10/9c! From our family to yours —love you! Vanessa & Clark Monroe.”

Clark chooses to like it and writes how excited he is. But to Vanessa, he says nothing, just tries to keep his face impassive. By the time he’s finished reading it—less than a minute after she wrote it, there are already a few hundred responses. Despite Vanessa’s hope and request for positivity, there are a fair amount of mad reactions. To be honest, though, Clark doesn’t care much about other people’s opinions.